“The diagnosis of generalised anxiety disorder is a distraction of no value. It is highly unreliable, co-occuring with many other disorders of firmer diagnostic status……..classification would be heartily relieved to rid itself of this unnecessary appendage and for the symptom of anxiety to remain as a descriptive term only.”

RECENT HISTORY OF THE ANXIETY CONSTRUCT

The term anxiety neurosis was first used by Freud in 1895 n German “angstneurose” and in French “nervrose d’angoisse”.

The first DSM was released in 1952 and in 1968 DSM-II was published. In DSM II  the diagnostic category “anxiety neurosis” was characterized by “anxious over-concern extending to panic and frequently associated with somatic symptoms” which includes both of what is now called panic attacks and GAD.

In 1980 in DSM-III,  the concept of anxiety neurosis was split in two: generalized anxiety disorder and panic disorder.  This split was supported by Klein’s “pharmacological dissection”.  Klein demonstrated that panic disorder responded to imipramine whereas generalized anxiety disorder responded to benzodiazepines.  This differentiation did not hold up over time and both classes of drugs can be effective for each condition.

More recently authors have felt that GAD is a residual category because individuals diagnosed with other anxiety disorders appear to meet the criteria for GAD simultaneously.

Up until DSM-III there was a hierarchical approach whereby a diagnosis of depression preempted a diagnosis of anxiety. This makes clinical sense and that depression may take precedence and treatment priorities.

The high rate of comorbidity of GAD and major depression is also problematic. It has been argued that GAD and MDD are both manifestations of the same condition. Alternatively GAD may be a prodrome to depression or represent a severity marker.

This raises questions as to the therapeutic usefulness of maintaining these as separate diagnoses.

DSM incorporated a hierarchical view: if a patient met criteria for depression then anxiety disorders were excluded as a diagnosis. This ensured focus on the superordinate diagnosis.

DSM-5 defines generalized anxiety disorder as excessive anxiety and worry. Worry is described as apprehensive expectation emphasizing that it is future orientated. This is in contrast to rumination which refers to thoughts about past events.

Three of six symptoms are also required for the diagnosis: feeling keyed up or on edge; restlessness; being easily fatigued; difficulty concentrating; irritability; muscle tension and sleep disturbance.

In DSM 5 it is noted that general anxiety or worry is a common feature of depressive, bipolar and psychotic disorders and should not be diagnosed separately if the excessive worry has occurred only during the course of these conditions.

In DSM-5, GAD is largely a diagnosis of exclusion. GAD cannot be diagnosed if the anxiety is better explained by another anxiety disorder (panic, phobic, social anxiety, or obsessive-compulsive disorder). Also, GAD cannot be caused directly by stressors or trauma, contrary to adjustment disorders and PTSD

Depression can have a specifier of “anxious distress”:

feeling keyed up or tense; feeling restless; difficulty concentrating because of worry; fear the something awful may happen; fear of losing control. 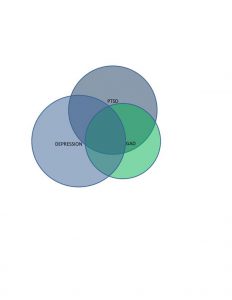 TRANSDIAGNOSTICS: FROM DSM TO RDOC

Sharp et al. identify the crux of the problem with the DSM approach:

” …the inability to differentiate between identical symptom presentations that are caused by two different etiologies…”.

Anxious  apprehension is the propensity to engage in negative repetitive thinking (worry).

Anxious arousal is an enduring pattern of hypervigilance, sympathetic arousal and fear.

In contrast to the trans-diagnostic  anxiety dimensions, anhedonia is a separate dimension that is associated with the diagnosis of depression and has  distinct  neuroimaging correlates.

Current categorical diagnoses are limited by reliance on overlapping criteria that lead to artificial “co-morbidities”. The GAD construct is a prime illustrative example of this.

Dimensional approaches allow for identification of early and less severe illness presentations that could lead to preventative interventions.  This is consistent with other areas of medicine eg hypertension and hypercholesterolemia are examples of dimensional diagnoses that allow for early intervention and secondary prevention.

Many important questions remain regarding the validity of current conceptual models of pathological worry and the discriminability of GAD from certain emotional disorders (for instance, mood disorders) and higher-order trait vulnerability dimensions (for example, negative affect).

Because the features of GAD are salient to current conceptual models of emotional disorders (for example, models that implicate negative affect or worry/anxious apprehension as vulnerability factors), research on the nature of GAD and its associated features should provide importantinformation on the pathogenesis, course, and co-occurrence of the entire range of anxiety and mood disorders.

Neuroscientific and psychological research posits that there are two

relationship to anxious arousal, whereas the dorsolateral prefrontal cortex and left anterior insula were found to correlate with both anxious arousal and

This article proposes a revision of the historical evolution of the concepts of generalized anxiety disorder (GAD). Currently, Darwin’s evolutionary theory is the dominant paradigm for modern science and influences research on mental disorders.

The successive editions of the Diagnostic and Statistical Manual of Mental Disorders have revised the diagnostic criteria for GAD, reflecting the prevailing psychiatric understanding of this disorder. The prevalence and symptoms of major depression and GAD show the fragility of the categorical conception of these conditions. Differences in cultural views towards anxiety disorders also suggest that anxiety cannot have a uniform definition. This article provides contributions for reflecting future guidelines concerning the diagnostic criteria for GAD in DSM-V.

Neuroscientific and psychological evidence points to severaltransdiagnostic factors that cut across DSM-defined disorders, which both affect and are affected by executive dysfunction. Two factors, anxiousapprehension and anxious arousal, have helped bridge the gap between psychological and neurobiological models of anxiety. This article integrates diverse findings of the relationships between these transdiagnostic anxiety dimensions, their interactions with each other and executive function, and their neural mechanisms.

The authors discuss how these constructs fit within the Research Domain Criteria (RDoC) matrix developed by the National Institutes of Mental Health and how they relate to other anxiety constructs studied with different methods and at other units of analysis.

The results of this study demonstrated that the BNST and insula continuously monitored changes in environmental threat level and also subserved hypervigilant threat-monitoring processes in more highly trait anxious individuals. These findings bridge human and animal research informing the role of the BNST in anxious-related processes.