A Comparison of DSM-IV and DSM-5 Panel Members’ Financial Associations with Industry: A Pernicious Problem Persists

Copyright: © 2012 Cosgrove, Krimsky. This is an open-access article distributed under the terms of the Creative Commons Attribution License, which permits unrestricted use, distribution, and reproduction in any medium, provided the original author and source are credited.

Funding: No specific funding was received for writing this article.

All medical subspecialties have been subject to increased scrutiny about the ways by which their financial associations with industry, such as pharmaceutical companies, may influence, or give the appearance of influencing, recommendations in review articles [1] and clinical practice guidelines [2]. Psychiatry has been at the epicenter of these concerns, in part because of high-profile cases involving ghostwriting [3],[4] and failure to report industry-related income [5], and studies highlighting conflicts of interest in promoting psychotropic drugs [6],[7]. The revised Diagnostic and Statistical Manual of Mental Disorders (DSM), scheduled for publication in May 2013 by the American Psychiatric Association (APA), has created a firestorm of controversy because of questions about undue industry influence. Some have questioned whether the inclusion of new disorders (e.g., Attenuated Psychotic Risk Syndrome) and widening of the boundaries of current disorders (e.g., Adjustment Disorder Related to Bereavement) reflects corporate interests [8],[9]. These concerns have been raised because the nomenclature, criteria, and standardization of psychiatric disorders codified in the DSM have a large public impact in a diverse set of areas ranging from insurance claims to jurisprudence. Moreover, through its relationship to the International Classification of Diseases [10], the system used for classification by many countries around the world, the DSM has a global reach.

This new APA requirement makes the DSM‘s disclosure policy more congruent with most leading medical journals and federal policies on FCOI. FCOIs are widely recognized as problematic because of the data showing a clear connection between funding source and study outcome whereby results are favorably biased toward the interests of the funder [12]–[14]—what has been referred to as the “funding effect” [15]. Some have argued that greater transparency of financial interests may facilitate a decline in FCOIs and a decrease in the potential bias that accompanies them, and that it may encourage professionals and consumers to more critically evaluate medical information [16]. Others are not sure that disclosure will reduce FCOIs and the potential for bias, because transparency alone just “shifts the problem from one of ‘secrecy of bias’ to ‘openness of bias’” [15]. Additionally, there is the concern that disclosure may open the door for subterfuge [17]. That is, when researchers or panel members list every affiliation that they have ever had, including funding from federal agencies, it can create a “signal-to-noise problem,” thereby obscuring the truth about deeply problematic financial relationships with industry.

In 2006 we analyzed all DSM-IV panel members’ financial associations with industry [24]. We have undertaken a similar analysis for DSM-5 panels, which allowed us to compare the proportions of DSM-IV and -5 panel members who have industry ties. There are 141 panel members on the 13 DSM-5 panels and 29 task force members. The members of these 13 panels are responsible for revisions to diagnostic categories and for inclusion of new disorders within a diagnostic category.

Three-fourths of the work groups (Figure 1; [2],[4]–[6],[8],[10]–[12]) continue to have a majority of their members with financial ties to the pharmaceutical industry. It is also noteworthy that, as with the DSM-IV, the most conflicted panels are those for which pharmacological treatment is the first-line intervention. For example, 67% (N = 12) of the panel for Mood Disorders, 83% (N = 12) of the panel for Psychotic Disorders, and 100% (N = 7) of the Sleep/Wake Disorders (which now includes “Restless Leg Syndrome”) have ties to the pharmaceutical companies that manufacture the medications used to treat these disorders or to companies that service the pharmaceutical industry. 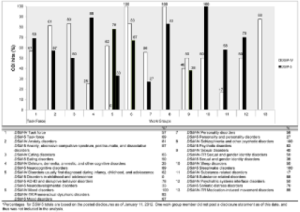 Although the APA has made the disclosure of FCOIs of DSM panel members more transparent, there are important gaps in the current policy that need to be addressed:

However, transparency alone cannot mitigate bias. Because industry relationships can create a “pro-industry habit of thought” [25], having financial ties to industry such as honoraria, consultation, or grant funding is as pernicious a problem as speaker’s bureau participation. Over four decades of research from social psychology clearly demonstrates that gifts—even small ones—create obligations to reciprocate [26]–[28]. Also, because of the enormous influences of diagnostic and treatment guidelines, the standards for participation on a guideline development panel should be higher than those set for an average faculty member [29],[30].

The DSM-5 will be published in about 14 months, enough time for the APA to institute important changes that would allow the organization to achieve its stated goal of a “… transparent process of development for the DSM, and …an unbiased, evidence-based DSM, free from any conflicts of interest” [emphasis added] [31]. Toward that goal we believe it is essential that:

These changes would accommodate the participation of needed experts as well as provide more stringent safeguards to protect the revision process from either the reality of or the perception of undue industry influence.