On May 27, 2021 Chief Rosanne Casimir, of the Tk’emlups te Secwépemc First Nation, made a shocking public statement: the remains of 215 former pupils  of the Kamloops Indian Residential School had been uncovered on the reserve. 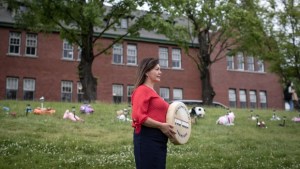 This announcement led to a widespread  public outcry in Canada and overseas.  Although it had been known for some years that many young pupils had  died in residential schools and had been buried in unmarked graves, it appears that most Canadians were not conscious of this information.

Many of the deaths may be attributable to maltreatment, inadequate medical care, poor nutrition, and susceptibility to infectious diseases including tuberculosis. It is not known if some of the deaths were the direct result of physical abuse or starvation.

The residential school system was a major part of official government policy directed towards the assimilation of Aboriginal peoples since 1879. The Canadian Government enacted  the notorious Indian Act  which resulted in the forced removal of 150,000 First Nations, Inuit and Metis children from their families. The last such school was closed in 1996.

The Truth and Reconciliation Commission of Canada [1] estimated that 6000 children died while being held in residential schools. Pupils were forbidden to speak their native languages, denied ceremonies and practices, traditional customs of their spiritual beliefs, and bereft of their normal attachments to their families and communities. Children were punished harshly if they spoke their native language. Punishments included withholding of food, chaining children to their beds and beatings[1,23].

When aboriginal peoples were forced off their lands and onto reserves they lost access to hunting and the  gathering of food. This was replaced by the introduction of foreign plants and animals that carried new diseases. Indigenous people were forced to adopt an alien diet with resulting medical complications such as diabetes.

High rates of tuberculosis and other imported diseases resulted in high levels of mortality relative to the rest of the Canadian population. In some areas tuberculosis rates  were almost 40 times higher than the national average. TB remains a problem in the far north of Canada in the battle with this disease is by no means over.

The first drama that these children experienced was being literally plucked away from their parents in an act of extreme cruelty. Attachment to one’s parents and families is a matter of life and death. The removal of these children was a mortal blow that led to profound psychological impairments that permanently scarred these individuals. The result was posttraumatic stress disorder, resort to substance use and chronic psychiatric suffering.

Canada is a G-7 country, one of  the seven most wealthy countries in the world and yet for decades the living conditions of many Indigenous people remains totally unacceptable. The Canadian self-deception is that of a country of progressive government and social values. A multicultural society in which immigrants from across the world are welcome and accepted. We have social programs and universal healthcare to protect our population. Why then are the living conditions of many indigenous Canadians still among the worst in the world? In many communities there is a need to boil water. Housing conditions are often poor. Suicide rates are ten times that of the general Canadian population and among the highest,  if not the highest, in the world [4].

It is hard for modern Canadians to accept that the colonization of North America involved a process of land disposition, extraction of natural resources, and ecological destruction. The policies and actions of Europeans settling in British North America and New France  included forced assimilation and strategies of physical and biological destruction as evidenced within the residential school system. Colonizers took control of indigenous lands which entails displacement and destruction of  native habitats and loss of the spiritual connection to the land.

Many Canadians have believed that this was all in the past. Clearly this is not true as evidenced in persisting  cultural anomie, community breakdown, inadequate housing, inadequate education, inadequate work opportunities. These have perpetuated high levels of distress, mental illness, substance misuse and suicide. The history of the treatment of indigenous Canadians  is one issue which is for the most part repressed from our consciousness on a daily basis. The average Canadian is not confronted with this issue on a day-to-day basis and may have little awareness of the history of cultural genocide and the dramatic impacts this has had across generations. The uncovering of the gravesite in Kamloops has blown this issue wide open.

Rene Linklater  has written that many indigenous healthcare practitioners and psychiatrists working with indigenous communities question the therapeutic value of DSM diagnoses [5]. Diagnoses may be required for administrative reasons to gain access to healthcare services and other funding. However diagnosis is limited by its focus on symptoms and categories that miss the historical and intergenerational context. These practitioners distinguish between complex posttraumatic disorder and complex posttraumatic response. The concept of mental disorder implies endogenous causes rather than responses to colonizing actions and policy. There is a failure to understand the historical and cultural trajectory that leads to the clinical endpoint.

Psychiatric practice is often  associated with over focus on the use of psychotropic medications. This unfortunately is widespread throughout many psychiatric services.. There is a risk that the diagnosis usurps the person’s sense of  identity . The diagnosis becomes “who the person is” and not what  they are experiencing. Psychotherapy, counselling, and traditional healing methods are essential. Reattaching to a community,  to an extended family can be healing to the chronic attachment damage. A sense of identity can be reclaimed by reconnecting with indigenous cultures and practices. Healing processes must be embedded in the context of indigenous worldview and interventions that are culturally coherent [5,6,7,8]. Trauma that started with the destruction of attachment bonds requires the formation of new attachments to promote healing.