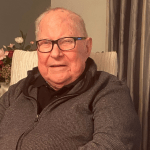 Dr. Emil Zamora has always believed in treating patients with compassion and empathy.

The former McMaster associate clinical professor and psychiatrist at St. Joseph’s Healthcare Hamilton was an early advocate for including families in patient care, ensuring patients with mental-health conditions never had to suffer alone.

As a lecturer and scholar, Emil instilled this family-centric care approach to a whole generation of psychiatry residents.

And now, the future of psychiatry in the city will be linked to his legacy through the Dr. Emil N. Zamora, Kathy Zamora and Family, Excellence in Psychiatry Award.

The award was established in 2021 thanks to funds gifted through Emil’s life-insurance policy. It is awarded to medical learners pursuing a residency program in the Department of Psychiatry and Behavioural Neurosciences who demonstrate academic and clinical excellence.

“Meeting with patients in the clinic was my forte,” said Emil, who retired in December 2021. “Through this award, I want to ensure the next generation of psychiatrists develop close connections with their patients like I did with mine.”

Emil was 16 when he enrolled at Queen’s University’s medical school in 1954, thanks to funding his parents secured from selling lots on the family farm.

During his fourth year as a medical student, he applied for a summer internship at the Ontario Hospital Hamilton (later renamed the Hamilton Psychiatric Hospital in 1968 before closing in 1995).

At the time, Emil had little interest in pursuing psychiatry as a career, but a patient he met on the way to his interview changed the course of his life.

“This patient was talking a mile a minute,” said Emil. “The doctor interviewing me explained that the patient had neurosyphilis. It amazed me how the brain can have that kind of effect on a person’s personality.”

From that point on, Emil changed his focus to neuropsychiatry. After graduating in 1960, he worked at Ohio State University for three years before returning to Canada for a year-long stint at Ontario Hospital Hamilton, followed by a fellowship at St. Joseph’s Healthcare in 1965. He joined St. Joseph’s on a permanent basis in the late 1960s, opened a private practice, and became a lecturer and associate clinical professor at McMaster in the mid-1970s.

At St. Joseph’s, Emil was one of the few physicians in Hamilton to administer electroconvulsive therapy (ECT), a procedure involving electrical stimulation of the brain. ECT is still commonly used today on patients with depression who don’t respond well to medication.

He altered psychiatric care in the city by advocating for family members to be in the room when a patient undergoes (ECT).

“It was revolutionary,” Emil explained. “It took the mystery out of the procedure and allowed families to ask questions and comfort the patient. It was another two or three years before other institutions followed suit.”

Emil taught and trained residents until 2005 and left the university in 2017. He continued with his private practice until his retirement in December 2021.

“My practice was never just focused on the individual. With permission of the patient, I always ensured the family played a role in the care.”

The award is also named after his wife Kathy, who Emil first met when they were 15 years old. But it wasn’t love at first sight – it was an amusing event that brought them together.

“Our family had a miserable little fruit stand and my parents sold Kathy some cherries that had insects in them,” said Emil. “She later came back and stole some good cherries. The nerve of her! But that was the start of our relationship.”

Kathy shared Emil’s interest in health care and enrolled in nursing school at St. Joseph’s. At the time, nurses were forbidden to marry, so the couple eloped in a tiny Caledonia chapel in 1958 and kept their marriage secret for a year. They honeymooned in Buffalo for two days before Emil returned to Ontario Hospital Kingston where he was working night and weekend shifts in exchange for room and board.

Shortly before Kathy was scheduled to write her registered nursing exam, she had a confession to make to the head nurse – she was married and pregnant with her first child.

“It seems that very next day they began accepting married women into the nursing school,”  Emil said laughing. “I’m not sure if we were instrumental in that decision, but it always seemed that way to me.”

The couple expanded their family with five children – a daughter who is a family physician in Oakville, a son who started as a pharmacist and is now a digital health consultant, a daughter who recently retired from ICU nursing at Toronto General Hospital, a son in the ecology field, and their youngest son who works in computer diagnostics.

THE SEARCH FOR HIS WIFE’S BIOLOGICAL FAMILY

Ten years into their marriage, the couple began searching for Kathy’s biological family. Coincidentally, Kathy’s biological mother was a psychiatric patient. Kathy was placed in a foster home at birth and adopted at 13 by the daughter of her foster parents.

“Kathy remembered bits and pieces of her family,” said Emil. “She was the youngest of five siblings and she remembered the name ‘Nettleship.’”

The Catholic Children’s Aid Society had no record of Kathy’s family history, but the couple never gave up hope. During a trip in Toronto, they began looking through names in the phonebook. The second “Nettleship” Emil called was the wife of Kathy’s long-lost brother.

“The next night we met most of her extended family,” said Emil. “It was magical. Everyone blended as though they were never apart for all these years.”

After the couple’s children were well into their school years, Kathy returned to nursing at St. Joseph’s hemodialysis unit. Following a rear-end car collision, Kathy stopped working at the hospital and began nursing in Emil’s private practice.

“Kathy continued nursing until a year before she died in 2016. I buried her on her 79th birthday,” said Emil.

In 2021, Emil began thinking about giving a gift to establish an award for psychiatric residents. It seemed like fate when his life-insurance policy resurfaced.

“I completely forgot about it. Kathy was the beneficiary of the policy if I predeceased her and I never cashed in on it. I couldn’t believe it when it showed up out of the blue.”

With the help of his son-in-law Jim, Emil donated the policy to create the Dr. Emil N. Zamora, Kathy Zamora and Family, Excellence in Psychiatry Award. The award honours his wife and family, who’ve been instrumental throughout his life.

“I wanted to leave a name as part of the history of psychiatry at McMaster and St. Joseph’s. This gift is a way for me and my extended family to continue to have a close relationship with the city and the community.”

Dr. Emil Zamora was an associate clinical professor at McMaster from the 1970s to 2017 and a private-practice neuropsychiatrist associated with St. Joseph’s Healthcare Hamilton from the 1960s until his retirement in December 2021. He helped introduce family-centred care into the profession in Hamilton, which is now standard in many psychiatric-treatment plans.

Why McMaster Donors Give: At McMaster University, every single donation, no matter the size, has the potential to make a difference in the lives of our students, the quality of our research and our ability to give back to our community and influence the future. We asked some of our donors and their families what motivates them to give. These are their stories.